How much in technology is augmenting me versus being a digital vampire? How much is one tool or another improving my life vs. taking time and control away?

I’m now about 21 months into having short-term memory problems. I had some kind of a memory degradation when I had a long surgery in early 2018. I began to realize that my best ability to multitask was shredded.

I also tend to work alone or in big complex organizations. As a result, I was jumping between tasks and tools. I was jumping between frantically trying manage my own life while working with other organizations’ project and time mamagement systems. Even in the same organization, I was working in many different tool systems. Each tool has a different assumption about how I interface with it, where are you interface with it, and what it does with my time and memory.

My husband of 33 years claims that I dont have memory problems: I am just now like most people.  That is probably true.

As a result of the shift, I’ve been doing a digital clean up and regeneration. I’ve been trying to build, rebuild, and understand tools, not just the ones that are jammed it me or popular in the press. I’m rethinking tools and looking under the hood about how this one may augment myself or how much that one is a drain on myself.

On another level, I’m looking at how I could intentionally augment myself.

This is awkward work, on purpose.  We are in such a world of abstraction that we are exciting onto tools in our lives that may just be kind of sucks that have really great tools just suck our attention.

From Music in LA to Digital and Music in Austin

We’ve just ended the second cycle of our Future of Music in LA projects at the Center for Music Innovation at UCLA Alpert.  We helped run a half-day symposium with the City of LA Dept. of Cultural Affairs and the UC Digital Humanities Initiative.  DCA organized another 11 events across February that connected event spaces, composers, and innovative artists that further stretched and asked the questions of what is Music in LA and whose Music is being created.  You can see the whole spread of events at this link at the CMI website and this link at DCA. This series and the experience of engaging in nearly all the sessions expanded my own vision of live music in a streaming age.  First, the fact that more than half of the RSVPs did not show and did not cancel, within EVERY community, was an intriguing item.  Why is that socially OK for a free event?  Are we in a digital collecting of experiences mode, afraid to miss out in having the option? I’m focusing for now on physical entertainment experiences and local communities, in conjunction with streaming, and just wrapped up our Future of Music in LA thread of events with the City of LA Dept. of Cultural Affairs and local partners….and continuing that work across the year.  It has opened up a lot of avenues for us in terms of looking at tech, music, and social change.  The patterns of creation in different parts of the community and how they are becoming in current regulatory, policy, and digital environments is a very interesting question, as well as what can be done on the more formal and informal fronts to nurture live music is an expanding conversation here.  It is probably launching two new classes here on engaging and creating live performance communities, within or despite our tech-connected world. And I’m still working on different types of tech literacies in a world where the commercial ventures are trying to be “frictionless,” transparent, and increasingly abstract.  Lots of AI/ML events and “listening” to how everyone is talking about a desired digital future. 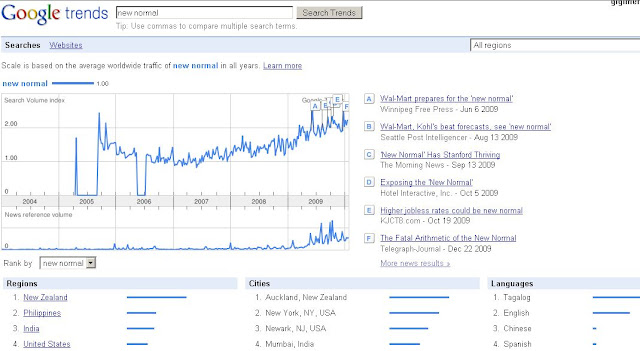 My husband has been amused how many times he has heard “the New Normal” since I wrote about that thought some time ago (March 2009).  You can search for it on Google Trends (http://www.google.com/trends?q=new+normal) and see that though it was searched for since 2005, it was a news topic increasing in 2009. Interestingly, the Beijing Review recently attributed as an idea conceived by Mohamed El-Erian, CEO of the global investment management company PIMCO, and said it had become a main idea at the Davos World Economic Forum this past month.

Yesterday, my husband was reading an online article yesterday and was intrigued by “the Great Humbling” as a related meme, but couldn’t remember where it came from.  It doesn’t yet show up on Google Trends.  So I thought I would search it to see its incarnations:

GET Free tools and creative boosts